We have been to York for three days, although for a while it didn't look like we would make it. The day before we left, I pulled a muscle or trapped a nerve in my back and couldn't move, well not without a lot of pain anyway. The pain had eased on the afternoon of the day we were going, so we decided not to cancel the trip and see how it went.

After we got settled in, we walked into town and had a beer in the Kings Arms but I felt sick (probably caused by the constant dull pain in my back) and we left to walk back to the van.

A note on the Kings Arms, it is probably one of the friendliest pubs in the world and even though we only visit York four or five time per year, as we entered the pub the landlord greeted us with "hello strangers long time no see". The Beer is also very good and very cheap.

On the walk back, I got my second wind and we popped into the Postern Gate, A Wetherspoons pub. I did know that a beer festival was on there and had been looking forward to a few new beers in there during our stay. Well I was very disappointed with the selection, during the festival you can get three 1/3 samples for the price of one pint but they didn't have three beers worth sampling. They had two stouts, two ciders, two Scottish beers and two beers they always have on. Anyway I got it wrong and ordered a cider (Dot drank most of it), then got a Belhaven, St Andrews Ale, before leaving, unhappy and didn't return for the rest of the trip. 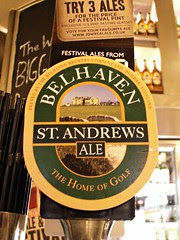 4.9% dark brown colour with a good head, very little aroma, the taste was tart, it was not at all good.
Posted by ralph-dot at 11:18 2 comments: