I was up early again, in pain but this time I think the extremely hot chilly off my pizza the previous night was also a contributing factor. After the painkillers and two hours in and out of the toilet, I got back to bed about four, for a couple of hours more sleep.

After breakfast and while the others were getting ready for a day out, I went for a short walk to try to loosen my leg up for the day in the car. I followed the railway until I came to river then turned back towards the accommodation. 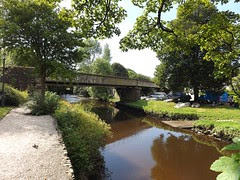 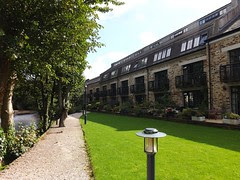 It was quite a short but peaceful walk along the river and I got all of the others to wave to me from the balcony. 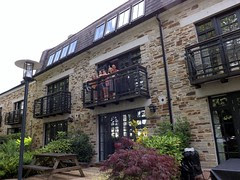 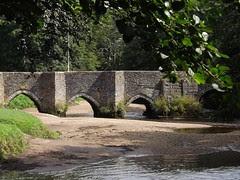 I think the plan for today was to visit Mevagissey and then continue on to the beach at Gorran Haven. Dot thought she had visited Mevagissey as a child whereas I thought I had never been there but it all looked very familiar (I will dwell more on this, after tomorrows trip to Polperro).

Parked up some way from the sea front and walked down to the harbour. Mevagissey is a lovely fishing village, although the tide was out, so the inner harbour was not looking it's best. As we explored the harbour the twins kept asking to go onto the beach and into the sea but we had to keep putting them off, as we had a very nice beach to visit later (and there wasn't much of a beach here anyway).

We walked along the piers and both sides of the the harbour.  I tried out the panorama setting on my new camera again and while is is easier to use than the old model, some of the frames are not stitched together  perfectly.

On the west side of the harbour there is a light house and and aquarium, so we had to mack a visit to both.  The aquarium is free and you can view all of the fish from the local waters off the south west coast. 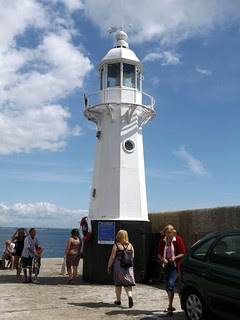 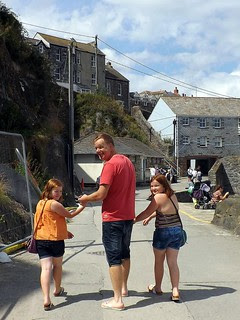 The drive to Gorran Haven was along very very narrow roads and when we did arrived, you could not even see the beach for the crowds of people already there.

We had passed through a small place called Portmellon where there was a nice but small beach but with no crowds.  So we turned around and headed back there.

As soon as we got settled on the beach we had our picnic but I could not get comfortable at all, so moved to a bench seat up on the side of the road.   While the others, mainly the twins had fun in the sea, I read my book, until I eventually gave in and popped into the pub next to where I was sitting for a beer (I will cover the beers in a separate blog soon) . 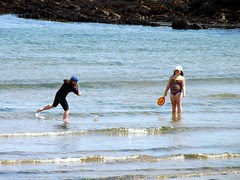 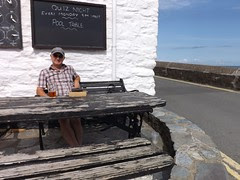 I had a traumatic incident outside the pub, where I spilt nearly a full pint of beer, after the initial shock, I checked my pockets and thankfully had enough money to purchase a replacement.  Panic over, but the experience will stay with me for a long time.

Then much later back at our holiday home, we had beer and pizzas on the patio next to the river in the evening sun, it doesn't get much better than that. 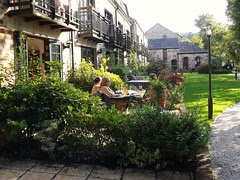 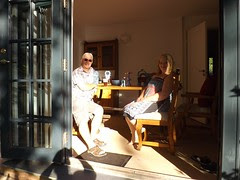