I have just dropped a full bottle of beer.
Posted by ralph-dot at 14:26 No comments:

The usual Friday night was different yet again, instead of the Smiths, we went to the Hope and Anchor, same village different pub.

The Hope and Anchor was very busy (we are not used to that) but we did get good service and we had to drink lovely Tetley's, Imperial.

I do not usually have a bad head on Saturday morning but today I do, it could be the Imperial or it could be the other beers I had when we got home. We were up late (late for us anyway), watching comic relief (red nose day) and drinking.

Tetley's, Imperial from England
4.3% dark brown with a good head, roast malt aroma and a fruity roast malt taste, this beer is a lot better than other reviewers argue and I like it. 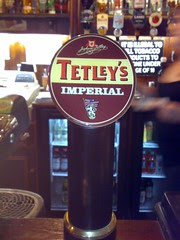 After the Crystal Red the next beer was a slight let down.
Daleside, Old Legover from England
4.1% brown colour with a good head, malt and hop aroma, slightly caramel bitter taste. Anyway it was time to move on after this one. 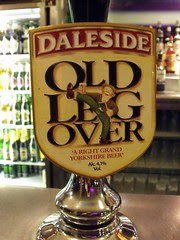 Finally I can get around to the new beers I had on our weeks holiday.
The First one was in Weatherspoons Postern Gate on Dot's birthday, as were quite a few others that day.
Saltaire, Crystal Red from England.
4.4% amber colour with a good head, toffee malt aroma and taste. I would have had another but there were more beers to try. 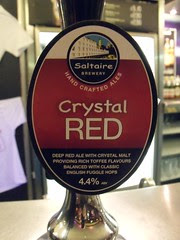 Bought in Rochefort France, within spiting distance of Fort Boyard. 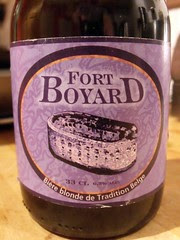 Very much behind with my reviews, as I have been away so here goes

Shepherd Neame, Dragonfire from England
4.5% dark amber colour with a thin head. malty aroma with some hops, the taste is slightly sweet and fruity. Nice

Short and sweet review, got a few to do. 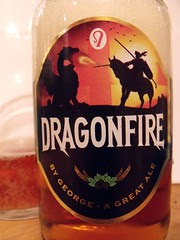 Just got back form a week away in York and Durham, a few new beers drank over the week (reviews to follow), there would have been more new beers but for the fact that Sam Smiths beers are readily available in both cites and Old Brewery Bitter is a favorite of mine.
Posted by ralph-dot at 11:07 No comments: