Mon the 2nd to Fri the 6th of November.

Nicole had invited us away with them to Center Parcs in Cumberland, it was well over two years since our last visit there almost three, although we had been to the one in Nottingham last year.

Mon the 2nd of November

We set off later than the others but met up with them in the pub on site for lunch, The Lakeside Inn. This is something we usually do on our first day there, before we have access to our lodge, we go for a drink and a pub lunch. Me, Dot and Emily had a Beefburger with Haggis on top, it was ok but I do not think I will try it again. We also had a couple of beers (Pedigree I think), the prices in Center Parcs are quite high especially the beer, although I suppose many visitors are used to it.

Around three we went off to see if our rooms were ready, there are not supposed to be until three thirty but it was ready. It was not far to walk from The Lakeside Inn and in fact it was the closest one to the Sports Plaza you can get.

Once settled in we moved on to the Sports Plaza and got seats near the pool tables and had a few games (and beers) before moving back to our lodge for something to eat. 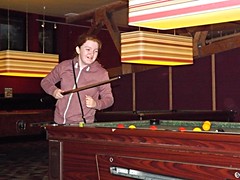 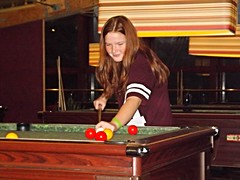 Back at our lodge, we just spent the evening sat about watching TV, we had some more beers of course and we had cheese and crackers for tea/supper.

Tues the 3rd of November

We had a very relaxing morning, I stayed in bed reading, something I rarely do nowadays, reading that is. But eventually I had to get up for something to eat.

We did have to be out early (before 11) for the girls to do the areal tree top walk, Dot and I let the others go first and we followed on just in time to see them up in the trees. We had to wait for a wile for one young lad to be lowered down, as he did not like it up there and I do not think I blame him. 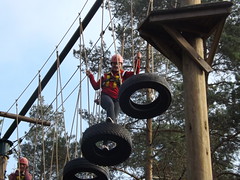 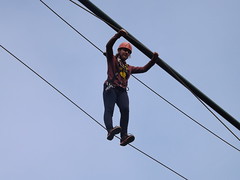 After lunch the others headed off to the pool and eventually Dot and I followed them over to the Village Centre but we didn't go in the pool, we just had a look around the shops. I managed to get a new beer from the supermarket there but I will cover that in another blog. We then had a cup of tea while we waited for the others, who turned up just as we got them, so anyway we all had a drink. It was only five when we walked back but it was getting very foggy. 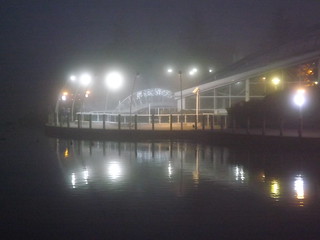 As we walked back we hoped that it would be better tomorrow night, as tomorrow night was to be firework night. Back at the house we ordered Indian for tea. It didn't take that long for the food to arrive and it was very good indeed. We had a right mix of curry's, chicken tikka masala, chicken jalfrezi and chicken korma, with some starters like Onion Bhaji and pizza for the girls.

We then settled down to watch the first part of the last Lewis ever on ITV.

Wed the 4th of November

I spent the early part of the morning reading in bed again but eventually I had to get up for a shower and breakfast.

At eleven the girls had the climbing walls booked, so we had to be out early to watch them. 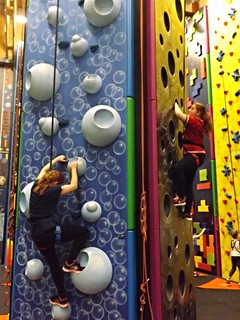 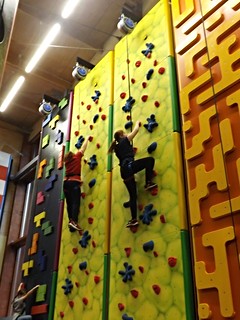 The girls were the two biggest ones there but I think they still enjoyed it though. Afterwards we went off to play pool and have our dinner there in the Sports Plaza. Beefburger without Haggis on top and with cheese instead seems to be a much better idea.

That afternoon we wandered over to the Village Centre ready for the fireworks that night, we walked through the Christmas avenue that was just about ready. The reindeer there seemed to be just settling in. 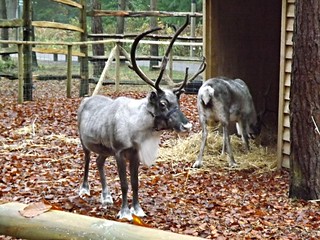 Over at the Village Centre we all had a game of ten pin bowling (and a beer or two, Jennings, Cumberland ale, I think), I won, this is not a usual thing, more of a fluke.

After the game Tim and the girls went into the pool, while the rest of us just sat in the bar. Nicole went outside to get a good place for us to watch the fireworks and eventually we all met up there with a very good view. The total lack of wind rather ruined the display but it was still good.

We wandered back to the lodge but went via the Christmas avenue again and the snow had been sprayed now, it looked really good. 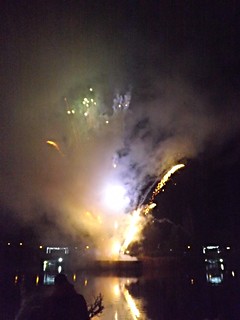 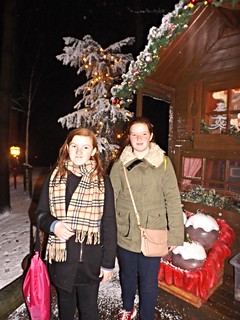 Back in the lodge we had cheese and crackers again and watched a Bond film we had with us, Quantum of Solace, by the time it was finished it was time for bed.

Nice quite morning, we didn't do much at all, except packing . On the afternoon though, George and Tim had an archery lesson (there were only two spaces available), so off they went with Nicole to watch them. Latter the rest of us wandered over to watch them and got the last quarter of and hour. 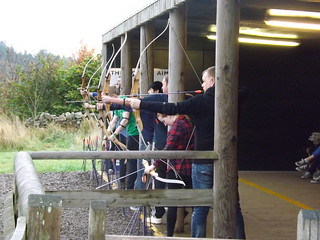 We then wandered over to the Village Centre and we walked through the Christmas avenue again on the way. 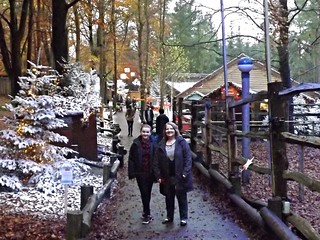 In the Village Centre we headed to the Italian, Bella Italia for something to eat. Up there in the restaurant we had a good view of Santa riding across the top of the trees. We all had something different, Dot and I had Pizza and a Pasta dish a sheared them between us. The beer in there was Becks, seems strange to have German beer in an Italian restaurant. 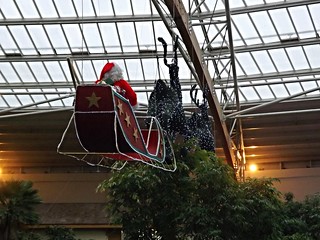 After our food we walked around the shops and even Dot bought things for Christmas. It was dark before we walked back to the lodge. Tim and the girls went back over to the pool while the rest of us rested but within half an hour, they were back. Someone had pooed in the pool and so it was closed.

Latter we had cheese and crackers again, watched another Bond film we had with us, Skyfall this time and again, by the time it was finished it was time for bed.

Fri the 6th of November

We had to be out of the lodge by 10:00 so we were up fairly early (no chance to read this morning). Tim went for his car and we got all our stuff in it and drove it back to the car park. We just parked up there, I pumped my tyre up and we wandered back over to the Sports Plaza to meet up with the others.

We played badminton for the first hour and then moved on to the table tennis, By now I was worn out, so me and Dot went up for a cup of tea. The others continued on and played tennis next, before meeting up for lunch. 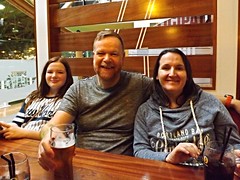 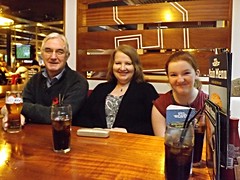 After lunch we played pool for a while then made our way over to the Village Centre to do some more shopping. From there we walked back to the car park where Tim brought his cat next to ours to pack. Then it was off home.
Posted by ralph-dot at 16:06 No comments:

The Guinness brewery has started making even more beers and while drinking some, I realised that I had never covered any of the Guinness beers at all on here. So here goes but remember, that I do not like the original Guinness Stout at all. By the way all Guinness beers are down as being brewed by St. James’s Gate (Diageo) brewery. 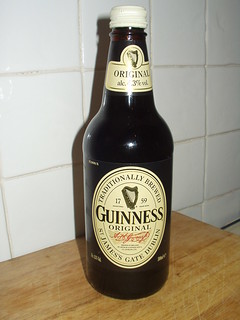 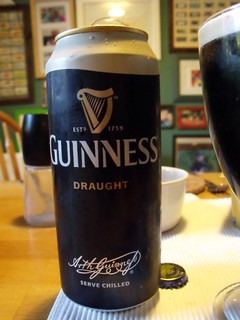 4.1% black in colour with a good white head, roasted malt aroma and a bitter stout taste, I have tasted some better than this. 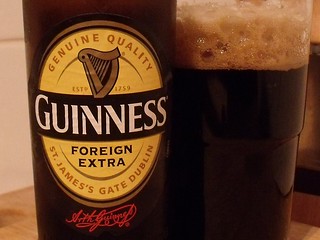 7.5% very dark with a thin but lasting brown head, slightly sweet Guinness aroma, bitter sweet roasted liquorish taste, better than ordinary Guinness. As I said, I am not a fan of the stout but this was very drinkable. 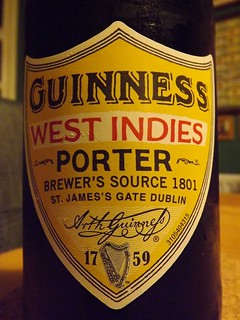 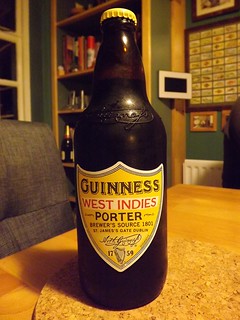 6.0% black in colour with a good head, a very good aroma and taste, although it is still a stout. 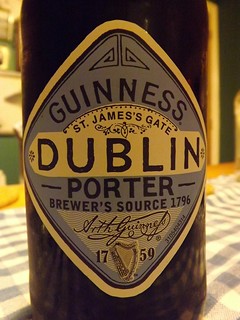 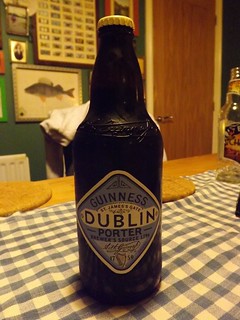 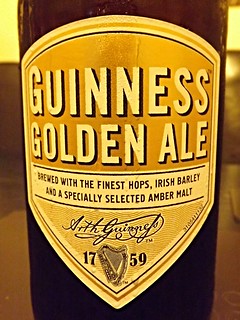 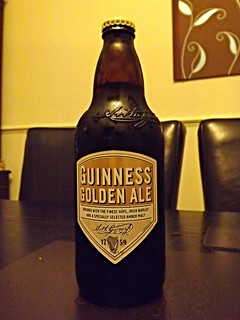 4.5% deep gold with a poor head, hop and malt aroma with slightly sweet not too hoppy taste, not bad at all. 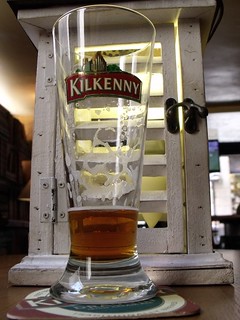 4.3% amber colour with a good head, (Irish Ale) smelled and tasted like an ordinary bitter, witch isn't that bad. 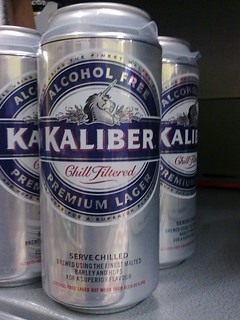 0.05% The first alcohol free beer (low alcohol beer) I ever heard of, brewed by the Guinness brewery. The reason the beer is photographed on the shelf is that I didn't buy it but I do like this European way of packaging alcohol free beers in blue, it helps avoid disappointment. If you want a drink without alcohol, is is hard to beat Cola drinks and even that tastes better with white rum in it.

There are plenty more of these, I will post them when I get around to trying them.
Posted by ralph-dot at 18:52 No comments: