Some beers from last summer

Just had a couple of the beer I bought on holiday (vacation) last year, there are reasons that they have lasted this long. Some of the beers I bought are bottle conditioned and I keep disturbing the sediment. Some others are very strong and sine my episode last year, I have been weary of drinking them. There are other still to be drunk but they will not last long now.

First I tried, Lancelot, Bonnets Rouge from France, one of the bottle conditioned beers and I didn't manage to pour it clean though. 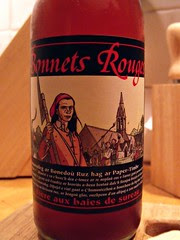 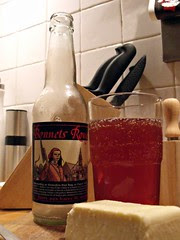 5.5% a hazy red colour with no head but what else can you expect pouring slowly, the aroma was fruity, as was the taste with fruity caramel malt in there, it was quite nice.

Next it was the strong one, Van Steenberge, Piraat from Belgium. 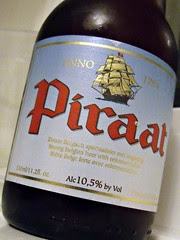 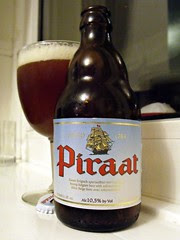 10.5% amber to red colour with a good head, sweet fruity ester aroma, taste is strong, bitter sweet and fruity, is is slightly over carbonated though but still very nice.
Posted by ralph-dot at 11:34 No comments:

Beer and a good deed

With this unseasonably good weather, we decided to go for an early evening walk and ended up at the Ship Inn Wolviston for a couple of new beers.

We then crossed the road to The Wellington, no new beers but we thought we would have supper there anyway. Where does the good deed come in you may be thinking. Well after I booked our food, I heard the waitress telling the men next to me at the bar, that everything was in the menu and he sat down to read it. As he was sat close to us we could see he was having bother with the menu and was looking at it and typing into his phone. We figured that he was foreign, we also reckoned he was waiting for the waitress to take his order but you need to order from the bar in the Welly. So I went to see the waitress and asked her if the gentleman was foreign and she confirmed he was. So I told her that I thought he was waiting for her to take his order and she said she would have a word with him. Credit to the The Wellington, he was served at his table, including drinks and the bill, well done.

The beers for the night, first I had a Captain Cook, Sunset from England 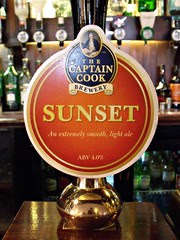 4.0% amber colour with a nice head, malty aroma, fruity malt with some citrus taste, quite good.

Next I had a stout, I can not find much about this beer on the net, Captain Cook, Schooner Grenville from England 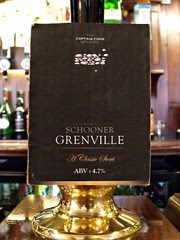 4.7% black with a good head, slightly sweet roast malt aroma, nice smooth roast malt taste. In 1763 James Cook was given command of the schooner Grenville to survey Newfounland over a four year period.

I also had an old favourite, Marston's, EPA from England 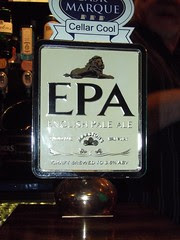