I have had a quiet weekend, although it was our first Friday night out for three weeks. Friday I had the usual quota of Tetley's Imperial and Saturday, Dot was out with the girls from work, so I was in on my own.

I watched the last Harry Potter film on DVD and had a couple of beers, one was a new one from Aldi, it was a big bottle and cheap but I will not be buying it again (Beer I will not buy again).

Aldi, Birra Rossini, I think it was from Italy. 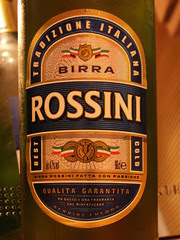