Well, we won a trip to Amsterdam last year but had to put off due to my illness but we did managed to do it eventually though. I would like to thank DFDS for there help and understanding with my problems.

Now I would like to say, that I did not think the trip was worth it, assuming we had paid for it, that is. We only had about four hours in Amsterdam, on the other trip we have done from Hull we seemed to have an awful lot longer. We had done Amsterdam from Newcastle before but I am sure it was run by a diferent company and that we had a lot longer there. If I where to do it again (which I doubt), I would go from the longer drive, from Hull. In fact we have used the Hull crossing on several occasions when going on holiday but never the Newcastle crossing, its a simple mater of money.

We set off nice and early for the ferry, we though we could do some shopping if we were to early. We were too early and could not be bothered to go shopping, so we went to the pub.  But not before we had a drive along to where the boat left from and took a couple of photos, although not the ferry. 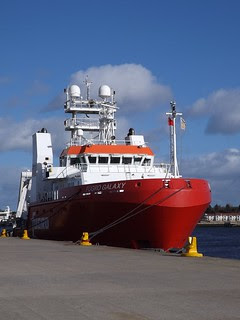 It was very early, about 11:30, but we just went for a drink anyway. Dot went to the bar (I was still not at my best) and eventually we also had our diner as well.   We had to be at the boat for around 15:00 but it still was quite a long time sat in the bar (especially as we had to be up late on the boat drinking as well).

Anyway it was well before three when we made our way to the ferry car park.  We parked up and walked over to the departure lounge, were we had to sit for quit some time before the departure opened.  Even then, we had to wait a wile, before we were allowed though customs and on to the boat.

On the boat we got out berth up at the top and back of the ship but at least we had a window to see out of.   First thing we did was to get out on deck to take some photos, luckily we where at the top. 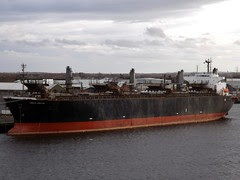 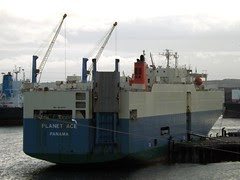 But I soon got fed up with that, not at all like the old me but not before I got some photos at least and the weather was good at the time. 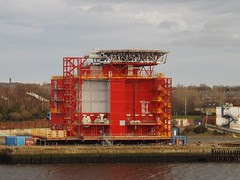 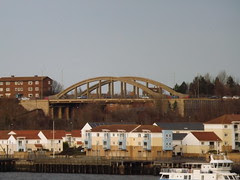 Back in our cabin we watched a film we had brought with us, before eventually having a walk around the bars. The bars were extremely expensive (well to me they were), just about the only beer on draught was Heineken, so we only had a couple before retiring to our cabin and bed.

Up early and ready to leave but only after some photos and I took rather a lot on the way in. 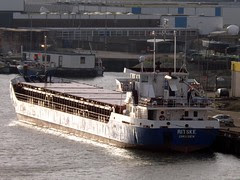 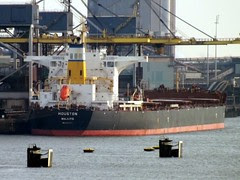 I was very surprised by the size of the queues to get off the ship and when we we eventually got towards the front we found it was caused by customs and passport control.  This was a lot longer queue that we have ever been in from a boat, it took absolutely ages. 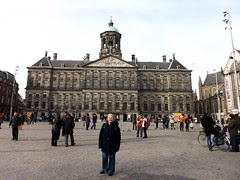 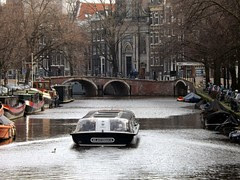 We had been twice before, so we were not wanting to look around too much and after all, we had won this trip. So we made our way away from the centre and walked out towards the Hard Rock Cafe. Not rushing you understand but walked slowly, looking at things along the way. In fact I took too many photos of bridges along the way but there are so many in Amsterdam. As we walked we bought sandwiches for tea on the way back home (there is no way we were going to buy food on board).

The Hard Rock Cafe, was a bit odd though, down stirs was full so we headed up stirs only to find it to be fearly full as well.   Then a lady started to bother us and told us to wait here and she would find us a place, we then noticed a queue outside waiting to come in (we had entered by a diferent door).   We said it didn't mater and went back down stirs and to our luck, two people were just leaving and we got a seat down there. 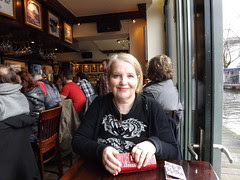 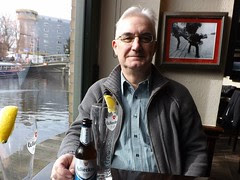 We had some very good but rather expensive food and drinks before heading off to walk back into the centre, the new Hard Rock Cafe is rather a long way out now.  Saying that, we had decided to just have a walk around, after all, we didn't have much time there and it was quieter out this way. 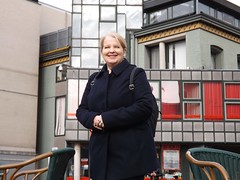 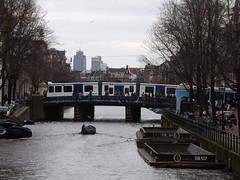 Dot wanted to go and see Anne Frank,s house, so we made our way back that way, it was quit a walk but it didn't take too long. The fact is though, we didn't have that long and when we got there, there was quite a long queue to get in. So we took a couple of photos and left to walk back towards where the bus went from. 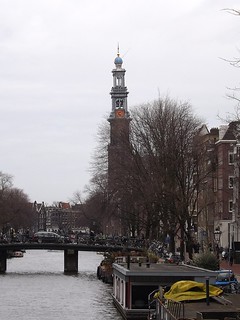 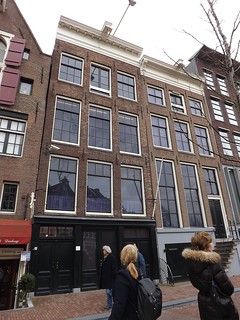 Well by the time we got to the bus, they were already leaving for the boat, so we just got on and headed back.  It was just after 15:00 when we got the bus back to the ship, so we were only in Amsterdam for three and a half hours.  Of course we could have been there for four and a half hours but that still would not have been very long. 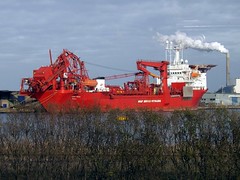 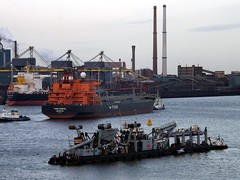 Back at the boat, we had to queue to get back on, brilliant.  We went straight back to our room and watched a film and took a few photos as we left Holland.  But that was the last of the trip, the weather was awful and I was feeling sick, not something that has happened to me for a very long time.  So we just stopped in the cabin.

With the weather better, we were also feeling much better as well in the morning.  Back at the entrance to the Tyne, we had to wait until another boat came out but we just walked through customs and that made a change.

Back in England, we went shopping in the Royal Quays and I even had my breakfast there but we didn't stay that long.

From there we crossed over the Tyne (well we went under the Tyne vie the tunnel) and headed towards Souther shields. Where we could see the boat, before driving round the front and heading south. 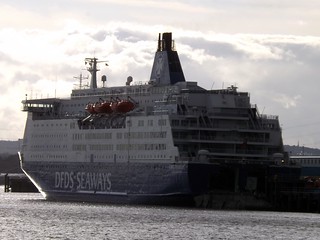 Well the car started acting up, so we just drove home, the end of another trip abroad.

As for the beers we had, well there were no new ones, in Newcastle on the way, we had McEwan's 80/-, on the boat it was Heineken or Newcastle Brown and in Amsterdam, we had Wieckse Witte.