Well here it is, I decided to have a go at, My Top Ten Belgian Beers.

I have had quite a few beers from Belgium but not enough to make a definitive top ten list of Belgian beers.  However what I can do is, make a list of those Belgian beers I really like and actively seek out to drink whenever I get half a chance.

As you know my descriptive talent for taste is practically none existent and that is why these blogs rely so much on photographs. But I am going to make an extra effort to try and say what it is that I like so much about the following beers.

Remember, this is my list, my top ten, my personal opinion, so please do not get upset if you favourite Belgian beer is not included.

Where to start? Well the Belgian beer I drink on the most regular basis is:- 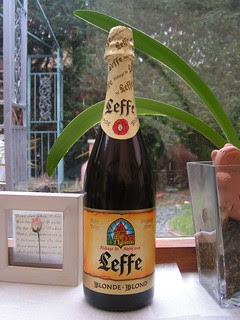 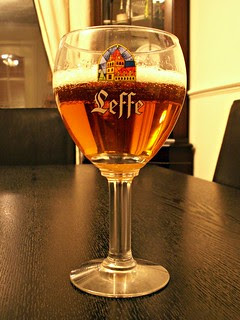 6.6% deep gold colour with a thin head, sweet malt and bubblegum aroma, sweet strong bubbly malt taste and a slightly bitter aftertaste.  I love it and it is always a pleasure to have one, especially after a particularly bad beer tasting.  The label has changed over the years but I still prefer the old one.

Besides Stella Artois, Leffe is probably the next best known Belgian beer outside Belgium, strangely all Leffe brands are now brewed at the Stella Artois brewery in Leuven.  There are many other Leffe beers besides the blonde, I have blogged about them before, see here. 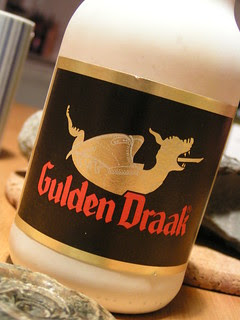 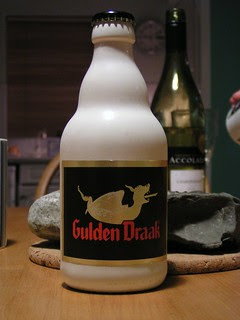 10.5% very dark red in colour with a thin head, lot of fruit in the aroma and the taste is very complex, it was like eating a quarter pound of Midget Gems in one go (this is a UK thing I think), Lyons Midget Gems that is, not Maynards and it is strong, a new favourite for me.  Gulden Draak is a beer for savouring, not a session beer.

Brouwerij Van Steenberge brewery is in Ertvelde, East Flanders. The beer is named after the golden dragon at the top of the belfry in Ghent. 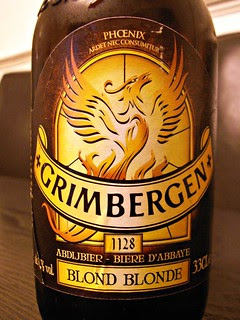 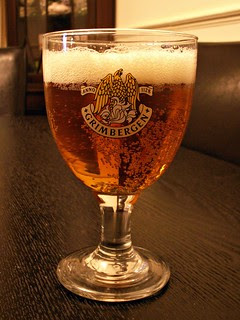 6.7%, golden colour with a thin head, sweet fruity aroma and fruity yeasty malty taste, a really nice abbey beer. Grimbergen is made by the large Alken Maes brewery for a Norbertine abbey. For me this beer is a close second to Leffe, probably because it is not always as readily available.

Another one were the label has changed over the years and again I prefer the old one.  As with the Leffe, there are many other Grimbergen beers besides the blonde. I have blogged about them before, see here. 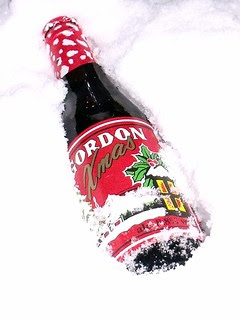 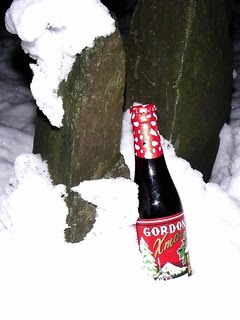 8.8% deep ruby red with a very thin head, roasted malt and port aroma, complex taste of roast malt, toffee, coffee, almost sweet sherry, very festive, like a Christmas party in your mouth. Absolutely loved it, the commercial description says "Created in the thirties, Gordon Xmas initiated the tradition of Christmas brews" I wish they were all this good.

But remember, just because I thought it was fantastic doesn't mean everyone will like it but in my opinion, if you are going to try a Xmas beer it should be different from the norm and taste festive. 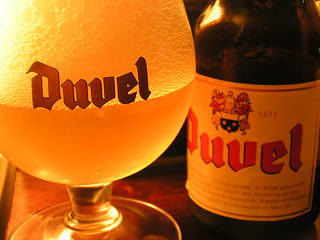 8.5% bubbly gold with a very good head, aroma is sweet and complicated, the taste is sweet malt with some citrus and bitter, very, very, good, it's a bit lively though sometimes, so have a glass ready.  Duvel is another of the beers widely available around the word and therefore, I can get this one whenever I want. .

Brouwerij Moortgat, is a Flemish family controlled brewery founded in 1871, Duvel is Brabantian, Ghent and Antwerp dialect for devil, the standard Dutch word being duivel. 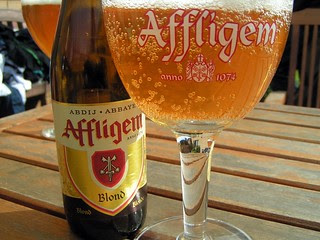 6.8% abbey blond, gold colour with a good head, hop aroma, although the commercial description says "low on bitterness" I found it to be bitter with a hoppy taste, not complaining though, I still thought it was very good.

Affligem is a classic abbey beer that was originally brewed by the Benedictine Abbey of Affligem. Since 1970, the beer has been brewery by the De Smedt brewery in Opwijk. 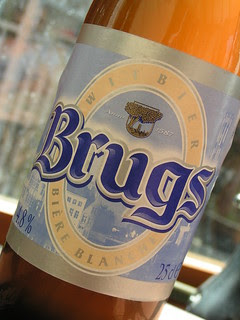 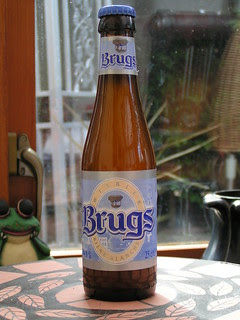 I struggled between Brugs and Hoegaarden Witbier, even though the Hoegaarden has greater availability and I really like it, I do prefer Brugs when I can get hold of it. 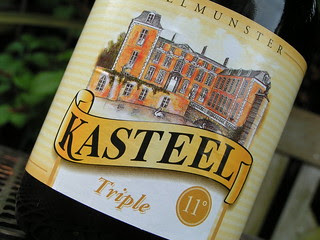 11% gold colour with a good head, the aroma is sweet alcohol and fruitcake, taste is sweet fruits, I like this beer very much but only drink it occasionally, it is a bit too strong for everyday use.

They also brew a Donker and a Rouge, as well as some other very famous beers, maybe I will pick one of them next time.

The family Van Honsebrouck, own the castle on the label, Ingelmunster Castle, the brewery is also in the town of Ingelmunster. 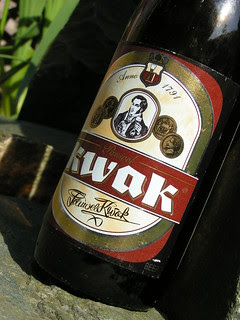 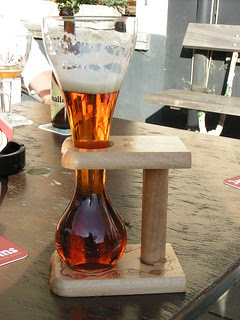 The brewery was founded in 1791 and is still owned and operated by the same family, now its seventh generation. Bosteels Brewery is in Buggenhout, the beer is reputedly named after an 18th century innkeeper and brewer, Pauwel Kwak. 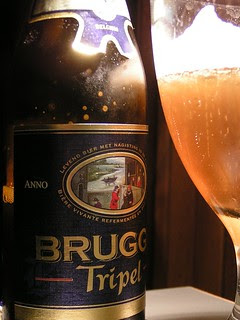 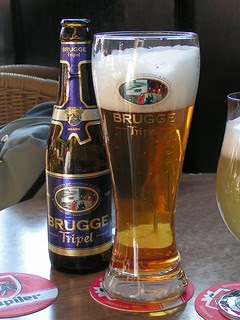 Bruges Tripel was brewed by the De Gouden Boom brewery in Bruges but since the acquisition of the brewery by Palm, it is now brewed at one of their breweries.

Some of the brewers above belong to the Belgian Family Brewers.

The members of the non-profit organization Belgian Family Brewers are Belgian breweries that have been brewing beer continuously for at least 50 years in Belgium. Together they represent 15% of the Belgian beer brewers, with a total of 1500 years of experience in brewing beer the traditional way. Currently 20 breweries are members.

The non-profit organization promotes the historical and independent family breweries, which truly provide added value to the identity and authenticity of the essence of Belgian beer brewing. It is a noble goal, because beer brewing has been passed on from generation to generation for centuries. That is why the authentic Belgian beers deserve a recognition that distinguishes them from other beers.

Lastly the top selling beer in Belgium it not Stella Artois which is by far the largest selling Belgian beer around the world but Jupiler.   Neither are included in My Top Ten but both are beers I wouldn't turn down, in fact there are not many beers I would turn down. 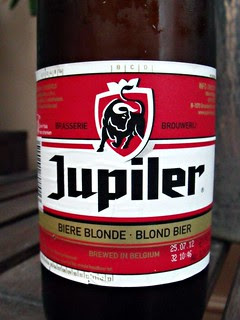 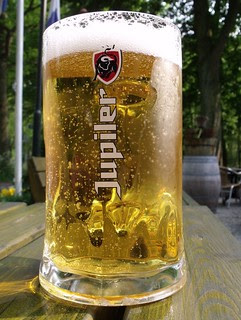 Well I could very easily do a second Ten Belgian Beers, and may do one day, depends what the reaction is to this one though.

Photos of my Belgian Beer Collection

Some of my other Top Tens

My Top Ten Dutch Beers
Posted by ralph-dot at 11:27