Time to get back to normal and start catching up.

In August it was our Ruby Wedding and we had two nights away in Newcastle to celebrate.  The hotel was close to the river Tyne and it's famous quayside just behind the crown courts.

40 years ago today was our wedding day, I was going to say it feels like yesterday but I won't.

It started to rain just as we arrived in Newcastle, we parked up beneath the hotel and as we were too early to check in, we had a couple of beers in the hotel bar as we waited.  After we checked in we popped to the small Tesco around the corner to get some chocolate and beer, to have while we prepared for a night out.

By the time we were ready to go out for a meal it was starting to rain again and by the time we got to the city centre it was pouring down. We had intended to walk around and pick out a restaurant, but the rain just got harder and harder, so we turned back to the first couple of places we had passed. Then picked the one with a name we liked, anywhere to get out of the rain really. Well we could have done worse than choosing Portofino's Italian restaurants. The food was very good (choice of beer was the usual for an Italian restaurant though) and the setting was fantastic. 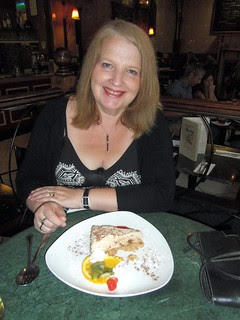 As for the beer, I think I only had the one Peroni before we moved on. 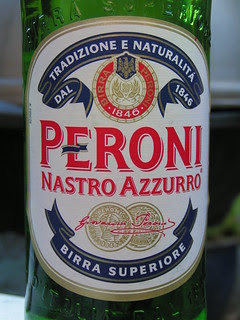 Peroni, Nastro Azzurro from Italy, 5.1%, pale gold colour with no head, it is a bit like fizzy water but at least it's drinkable and it was ok with the meal.

The rain had eased by the time we left and we made our way down to the riverside. On the road down we came to a pub with music blasting from the open doors, we stopped and debated whether to go in for one. I was surprised to find that it was a BrewDog pub, I didn't realise they had any outlets of their own (they do in fact have seven with more on the way).

We went in, Dot had a Trashy Blond I had an Alice Porter, I should have read the board properly, as Dot could have had a Kriek. The band stopped playing as soon as we entered and didn't come back on until we were ready to leave. We did stop for the first two songs, but I am glad we were leaving as they were too loud for the size of the room (and I am getting old, still love the music, just not too loud anymore). 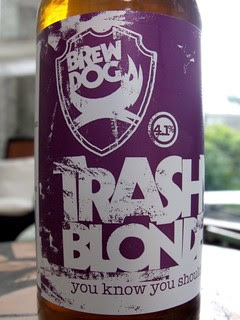 Down by the river we went into The Quayside a J D Wetherspoons bar, and sat up on the mezzanine level.  Here I though I would get to try a few new hand pulled beers but the selection although varied, was not what I would have usually expected from a Wetherspoons.   There was one I hadn't had and enough good old favourites to keep me going though.  The new beer was, Woodforde's, Wherry. 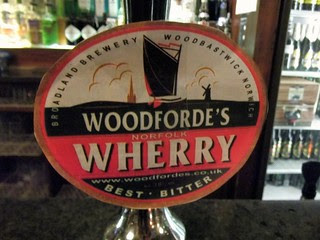 On the walk back to the hotel, I did what I always do (usually in York though), I tried to take photos of bridges in the dark. Unfortunately I do not have the camera for taking such photos and I know it but after a drink I always have a go. 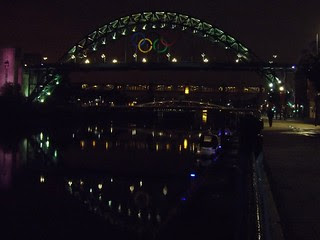 After a short walk along the river we retired back to the hotel.

Today was going to be a shopping day, hit the shops until we were too tired to carry on then retire to the bars. The original plan was to go on a river boat trip but we discovered they do not run on Monday's.

Well in the end neither of us fancied shopping, we nearly went on an open top bus tour but the bus left as we walked towards it and it was an hour before the next one. So we went for a bacon bun from Greggs and had them in the sun by the river, the weather had improved noticeably.

As it was sunny we though we would just have a nice leisurely walk along the river, we walk downstream last time we were here, so set off upriver this time.

It was getting on for lunch time as we got to The Quayside pub we were in last night and they were still serving breakfast. After a brief discussion we went in for a Traditional Breakfast (it would then last us until our evening meal), the tea and coffee cost almost as much as the food, they were not expensive, it's the food that is cheap but it is good.

We did about a three hour walk, an hour and a half each way, around four mile in total.  We didn't walk for all the time, we had a couple of sits in the sun and bought fruit drinks for refreshment.  On the way back, after our last sit in the sun, I went to take a photo and discovered I had left my camera on the seat (I had been messing about changing batteries).   I started to run back to see if it was still there but after a short distance I spotter two joggers coming the other way, one had a camera in her hand.  I waved them to stop and it was my camera, they had found it and were going to hand it in to a police station.   If the had I would never have seen it again, because I wouldn't have checked, with the police.  I thanked them profusely for their good deed, it saved me a camera and a heart attack from running too far. 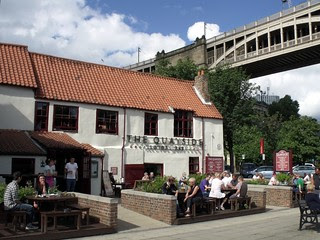 By now we were back at The Quayside pub and stopped for more refreshments, before going back to the hotel to get washed and changed for the night.  They had two new beers that were not on the menu the night before and both local brews. 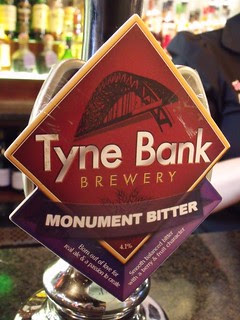 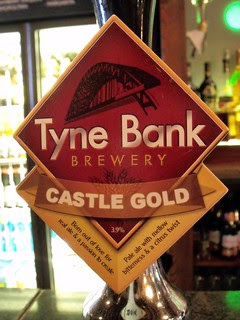 That night we returned to The Quayside pub and had a meal there and a few nice beers.  When we left about ten, there were people still in the from when we were in on the afternoon, some were very drunk. 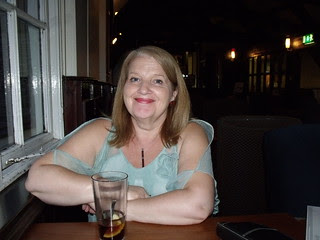 You will probably be thinking, I bet he didn't try to take photos of the bridges in the dark again, well if you are, you would be wrong, I just can not help it. 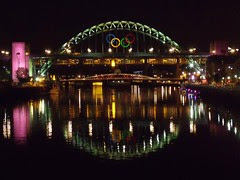 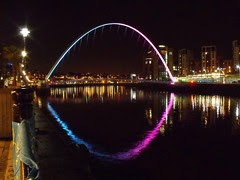 First thing we went to the The Quayside for breakfast, it was good and cheep yesterday so why not. It was nice and sunny so we sat outside. 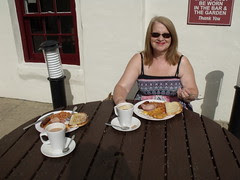 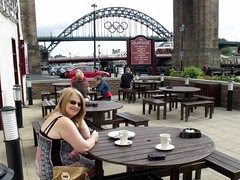 It wasn't even 10:30 when we arrived for breakfast but there were two full beer bottles already on one of the tables outside. I assumed that someone had left them, as it was Fischer, Desperados Red from France, and I would have left them. 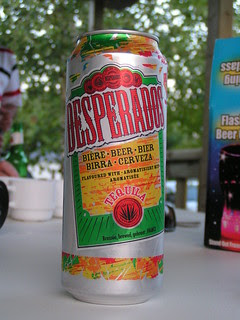 5.9% tastes like an a sickly English lager and lime. Someone should have warned me about this dreadful beer, before I bought some in France.

Anyway they hadn't been left. a young man sat at the table and drank them both, then he went to the bar and came back with a pint of lager, which he drank straight off and left. He repaired several minuets later with two Jägerbombs and downed each of them in one, then had another lager, all of this was in the half hour we were there and all before 11:00 am.

Next we drove to Tynemouth, somewhere we had never been, we stuck to the river wherever possible and parked in North Shields at the fish quay (somewhere else we had never been).  We couldn't find any parking restriction signs so assumed we would be ok to park there. 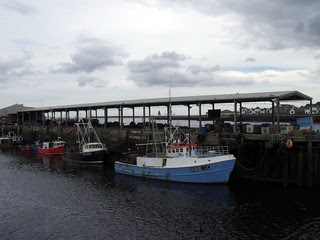 We walked along the promenade to the end, taking photos of the lighthouses on the way and then it was up the bank to Tynemouth priory and castle. 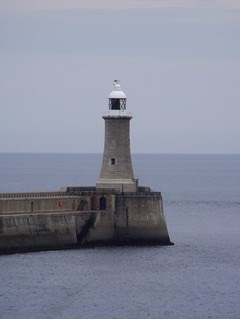 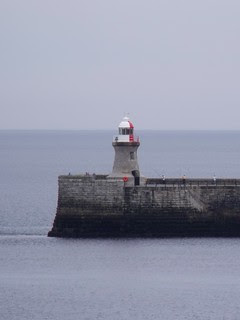 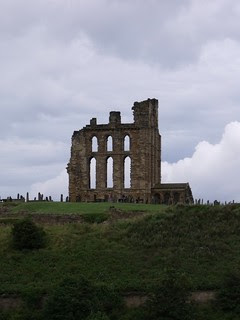 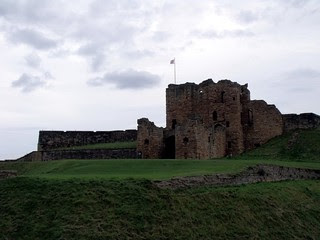 We took a shortcut back that didn't work and we had to climb over a wall to get to where we wanted to be.  Back at the car it was time to head home.